In a statement today, officials from Grand Haven Whale Watching made the bold announcement that they are considering moving to the former Tanglefoot Park in the Village of Spring Lake. 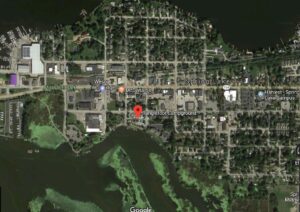 When asked if the move would mean a name change to Spring Lake Whale Watching, Mary VanDoosenburg, Founder and Chief Oceanic Officer was non-committal.   She referred the media to Ima VanSmithen, Customer Service and Ticketing Manager, who was unavailable for comment at press time.

Apparently, the residents at Tanglefoot Park have been causing trouble ever since the opening of Eastpointe RV Resort across the river in Grand Haven.  An east-end resident, Jerry Proudeaster, standing in line at the new Norm’s Ice Cream (at the corner of Beechtree and Washington) said ever since the Eastpointe RV park opened the residents of the two parks have been flinging water balloons across the river at each other in what has become a terrible rivalry.    Some locals have nicknamed the rivalry the “Drawbridge Nasty.”  Things got really bad when one of the northbound water balloons hit a Spectrum (Charter) service tech who was disconnecting a resident for non-payment of their pay-per-view services at Tanglefoot during August 2018.

In a somewhat unrelated comment, Proudeaster said “the cones at Norm’s are huge and they are the best value around. I would eat here every day if they accepted debit cards.”

Grand Haven Whale Watching did release a leaked photo from one of the Tanglefoot security cams (below) that seems to show angry rv’ers retaliating against the Eastpointe instigators. 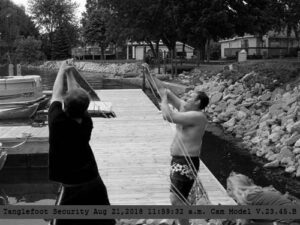 The red line on the map below shows the alleged path of the water balloon launched from Eastpointe RV park when it hit the Spectrum (Charter) service tech who was disconnecting a resident for non-payment of their pay-per-view services Tanglefoot Park. 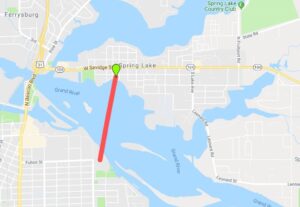 In response to the rivalry, the Village closed Tanglefoot Park this year and recently announced it may be closed for good.   While the Village used the excuse of construction for the closure, it is clear that was an attempt to not make the residents of Eastpointe RV park feel bad and allow the City of Grand Haven to save face.  VanDoosenburg said, “Word on the street is it is a goodwill gesture on the part of the Village to keep peace with Grand Haven.  With all the money flowing into the Village through the Epicurean Village project, money is no longer an issue in the Village.  On the other hand, Grand Haven is looking for ways to fund the replacement of their 100-year-old water pipes.   Spring Lake apparently feels like it is the least they can do for their poor neighbors.”

It was also noted that tenants at Tanglefoot had recently written their initials in a freshly poured concrete slap and wrote a chalk message on the park’s roadway protesting the prohibition of bird feeders in the park and the lack of shuffleboard courts.

Around Spring Lake, the area had gained a reputation as a place you did not want to visit after dark or during the annual walker and wheelchair festival.

The permanent closing is in question with the recent request for injunctive relief by AARP on behalf of the park’s tenants.

Now that the RV’ers will no longer be hogging the space, Grand Haven Whale Watching believes a bit of dredging could make the old Tanglefoot park a great home for their vessels.  This does mean the drawbridge will have to open every 15 minutes (for each excursion), but the people of the area don’t seem too concerned and actually enjoy the charm of frequent drawbridge opening.

When asked if Grand Haven Whale Watching was concerned about moving out of Grand Haven, VanDoosenburg hesitated and then reminded us how difficult it has been to negotiate a permanent home for her company on Dewey Hill.  She also indicated that the new Paddle Pub pedal-powered boat has been treated more positively than her efforts to dock in the same spot at Chinook Pier in the past.